As built, A 472 was a de Glehn four-cylindered compound expansion locomotive. The reason for the use of this system was that from about 1900 there had been a great revival of interest amongst mechanical engineers in gaining greater thermal efficiency and hence economy of fuel use from locomotives. NZR’s engineers were keeping up with their field.

In 1890 the Nord introduced a class of Atlantic (4-4-2) type locomotives designed on de Glehn’s system which earnt an enviable record for themselves. These caught the attention of G J Churchward of England’s Great Western Railway, who bought a similar engine from Societe Alsacienne in 1903. Two years later he bought two more, larger ones. Reports speak of these engines having performed excellently, but Churchward dropped the compound principle and retained the split drive for all later GWR four cylindered engines.

The major reason for the loss of interest in compounding at that time was that by then Herr Dr Wilhelm Schmidt (1858-1924) was actively promoting the high temperature fire tube superheater he had invented and applied to two locomotives of the Prussian State Railways in 1898. His more successful third design came into general use from 1901, after having been fitted to another engine on the same system. The thermal efficiency of any heat engine is governed absolutely by the difference of temperature in degrees Kelvin between the peak and exhaust temperatures in its operating cycle. The beauty of the superheater is that it is a simple device that raises steam temperature above (often a long way above) the temperature at which it was generated from the water in the boiler. Because exhaust temperatures to atmosphere are essentially fixed, locomotive thermal efficiency improved markedly as a result of the live steam from the boiler being so much hotter than formerly. That made for a much more efficient and economical locomotive. Dr Schmidt was unlucky, as within a few years of his invention becoming widely accepted, Germany fought and lost a war with most of the other major industrial countries. His invention was conveniently treated as war booty so he lost his patent rights.

Meanwhile, in 1905 A L Beattie of New Zealand Railways had set the requirements for designing a new express passenger engine to replace the various 4-6-0 classes and the Q class Pacific on the most important South Island workings. In addition, it was clear that the completion of the North Island Main Trunk line was getting closer, so that comparable work was clearly going to open up in the North Island. Detailed design for this, which became the A class, a four cylindered de Glehn compound Pacific, was passed to G A Pearson, then Chief Draughtsman, who produced a design well up with proven good practice of the day. Pearson moved to be Locomotive Engineer, Petone before the design was complete. R Pye-Smith replaced him in Design Office. One of Pye-Smith’s decisions was to use Walschaert’s motion for the valves of all cylinders, unlike the original design, which had Stephenson’s motion for the high pressure cylinder valves. Four engines were built before the change became effective. To work the hard, central part of the North Island Main Trunk, the same compound principle was adopted for a larger 4-8-2 design. This latter became the X class, the last example of which is owned by our Society.

Beattie’s first order for the A class went to Addington Workshops. Eight engines were to be built July 1906 – March 1908 for South Island use. One of these, A 409, was built as a two cylinder simple expansion engine. It entered service 20 July, 1907, apparently to permit comparative testing. Two years later it was fitted with an Addington boiler which had a Cole superheater supplied by the American Locomotive Company. One outcome of tests was that in Canterbury where A 409 always worked, this engine was rated to haul goods trains some 50 tons heavier than were the compounds, matching the performance of the later Ab class despite being noticeably lighter in weight. A 409 had been designed after Pearson left the Chief Mechanical Engineer’s office. Pye-Smith has recorded that it was “by far a most economical engine”. A second outcome was a policy decision that new designs would be superheated and that for them efficiency gains of compounding were not worth the added capital and maintenance costs.

Two more orders for A class locomotives went to A & G Price for work in the North Island. The first was for twenty engines in 1907. Those A class locos. numbered up to and including 429 had originally been fitted with an intercepting valve that enabled them to be worked as four-cylinder simple expansion engines, for short term added tractive effort. Not an action a fireman would favour if continued over any distance. Some drivers over-used this feature, with the result that low pressure cylinder bolts were overloaded and loosened. Consequently, as these engines were shopped for overhaul in the 1910-12 period, intercepting valves were removed. The second Price order was for thirty that were built 1910-14. A 472 was one of this last batch, being recorded as entering service 13 March, 1911. These differed from the earlier batches by being fitted with a live steam valve which enabled the driver to supply live steam to the low-pressure cylinders, augmenting the exhaust steam coming from the high pressure cylinders for extra tractive effort. For this reason, this last batch carried a classification of Ad until after 1915.

As built, the A class had 1700 gallon tenders, which quickly proved to be too small. When an order for 30 Bb class 4-8-0s was placed with A & G Price Ltd., 2200 gallon tenders were specified, these to be exchanged with those for A class engines once in service. A 472 received its larger tender in January 1917, when it was in Petone Workshops with Bb 55.

Four boilers were carried by A 472 in its lifetime. Its second, fitted in April 1926, had the Railways Department’s own design of superheater. A 472 carried this boiler until 1944, after its conversion to simple expansion. In January 1934 it was transferred to the South Island. It was officially received at Hillside Workshops in March of that year, being passed out after an A grade overhaul on 18 August. This was the time that its (second, 2200 gallon) tender was rebuilt with the larger bunker and had heavier springs fitted on the bogie under this. Enlarging the bunker was a response to increasing use of soft coals which had lower calorific value than did the West Coast coals, hence a need to carry increased weight and volume of fuel. The acetylene lighting was replaced with electric at this time. In July 1937 the brake pump was moved from the fireman’s side of the smokebox to the running board by the firebox on the same side. In September 1939 minor changes were alterations to the brackets for the fire irons and the fitting of new toolboxes on the tender. By the 1930s, the class seems to have generally acquired the NZR standard “flower pot” funnel, but to have retained the old standard single note whistle until after 1937. (Note: Eight of the class received chime whistles earlier, before a policy decision that single note whistles would only be replaced on Ab, Wab and Ws classes.) A 472 continued to run as a compound until 1942. It was rebuilt as a two-cylindered simple expansion engine at Hillside, being outshopped as such 31 March, 1942. Despite reduction of boiler pressure to 190 lb/in2 , the change gave a useful gain of 18% in calculated tractive effort, to match that of the Ab class. The last significant change to its appearance came in May 1949, when a ballast block was fitted over the front bogie.

Most of A 472’s South Island work was confined to hauling general traffic between the limits of Ross and Otira. Two particular tasks from this period deserve mention here. In January 1935 it was shopped again, fitted with brackets to carry the official coat of arms and repainted to haul the Royal Train of the Duke of Gloucester. Much later, A 472 was used to haul our Society’s Westland rail tour on 6 January, 1958, between Ross and Greymouth.

Coal, timber, general freight and passengers were the general ladings, though for much of the year lower loaded express trains on this route were usually hauled by Uc class 4-6-0s, one of the classes the first batch of A class Pacifics was built to supplant. The Greymouth Uc’s were scrapped 1955-59, mostly after bridges and track on the Stillwater – Westport line had been strengthened sufficiently to carry the A class.

As an indication of the work this class did (at this stage all classes concerned carried superheater fitted boilers), the following tables give some load schedules. In the North Island (1947): 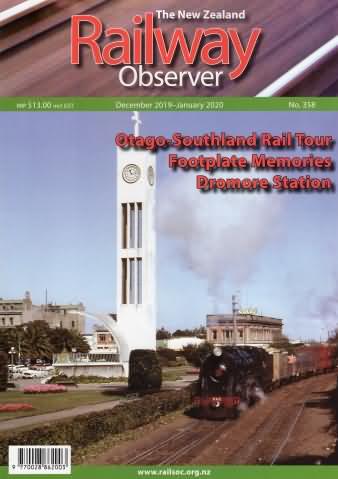